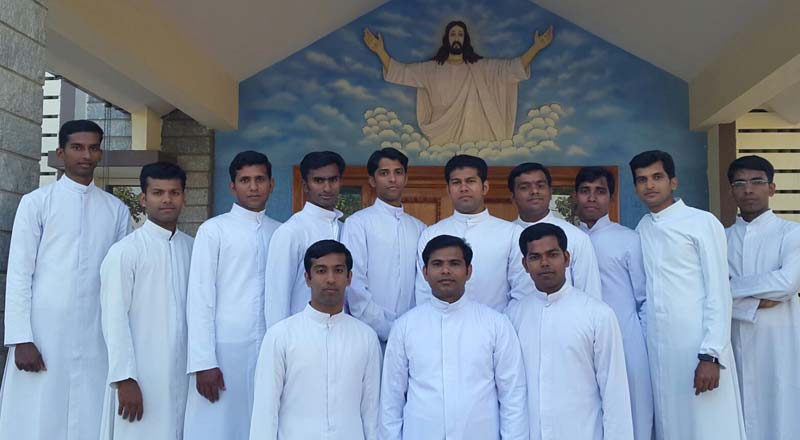 The Order of the Clerics Regular Minor (Adorno Fathers) came into existence in the 16th century and was one of several approved by the Church, before and after the Council of Trent, under the general name of Clerics Regular. We are a religious Order of priests and brothers founded by Saint Francis Caracciolo, Venerable Augustine Adorno and Father Fabrizio Caracciolo in 1588. By solemnly professing the four vows of Poverty, Castity, Obedience and Not Seeking Ecclesiastical Dignities, we follow the example of Jesus Christ who Himself was poor, chaste, obedient and humble.

Centered on the Holy Eucharist, we desire to sanctify ourselves and the entire People of God by imitating in our lives the Paschal Mystery of Christ.

As a religious family, we strive to share with one another the joys and sorrows of everyday life. Our Order is open to those who are called by God to embrace the religious life. As religious, the candidate may pursue the life of a priest, brother or permanent deacon.

With our rich history, the religious community is first of all a mystery, which must be contemplated, accepted and lived with faith and grateful hearts. Source of our common life is the spirit of the Risen Lord, who, when present in us, transforms gradually our hearts and renders possible staying together in charity.

Our Coat of Arms shows the Risen Christ in a baroque setting reminiscent of the period-the 16th century when the Order came into existence. It was Sunday after Easter, April 9, 1589 when the founders St. Francis Caracciolo, Augustine Adorno and Fabrizio Caracciolo consecrated themselves to the Lord with the profession of vows and pledged that their life would fully dedicated for the greater glory of the Risen Christ.

Our Motto: The letters A.M.R.G. stands for Ad Majorem Resurgentis Gloriam: For the Greater Glory of the Risen Christ, in whose honor and glory the Order is dedicated.

C.R.M. (Clerics Regular Minor) The Clerics Regular was a general name for all the religious Orders which followed the Council of Trent. Regular stands for a rule of common life that we follow. The word Minor was given to the Order by Pope Sixtus V, who himself was a Friar Minor, and may have wanted it for personal reasons but it was readily agreed to by our Founders in view of the great emphasis they placed on humility.

For a 'Missionary Disciple' in a challenging world